This year we are exploring different patterns of student experience. This is part two of a set of three articles about the life and work of Irby J. Good, Class of 1908.  Read the first article here.

This past week, a small group of UIndy faculty, staff, students and alumni laid a wreath at the grave of William M. Karstedt, who was one of the founding trustees of the college. It was a very simple occasion, but I trust that our lunchtime celebration of the life of this founding trustee was an appropriate gesture of respect toward the gentleman who supervised the construction of the building that today we fondly call Good Hall.

Originally, I had hoped to take a small group to the site of President Good’s grave. Turns out that Good’s body was cremated (as per his wishes) and no one knows the disposition of the cremains. Robert Wolfe, one of Irby J. Good’s grandchildren, reported, “We understand that his ashes were spread according to his wishes. We are certain that, during his lifetime, Dr. Good poured his creative spirit into the College, even if his ashes are now less clearly defined in place and time.”

As tempting as it is to read something more into Mr. Wolfe’s statement about the location of his grandfather’s grave, I think it is more important to focus on his dedicated service and leadership for the “great cause” of Indiana Central College. In Mission Matters #48, I will conclude this set of three reflections with comments about the implications of Good’s student experience and life of service for the way we think about the mission of the University of Indianapolis. 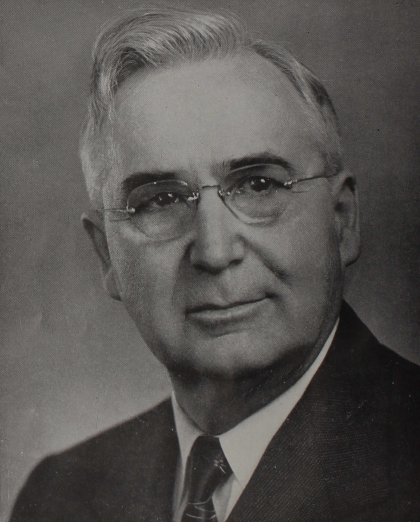 As his obituary makes clear, Good’s life was defined by his dedication to his alma mater. As difficult as it is for 21st century UIndy faculty and students to imagine what it was like for Irby J. Good to be a student (see Mission Matters#46), I think it may be even more difficult for us to grasp what it was like for Good to take on the responsibilities of chief executive officer. He was only 30 years old when he became president, but by that time he had been involved in the leadership of the fledgling enterprise in one way or another for a decade. And at the time of his death in February 1945, the list of his accomplishments included the rather oddly diminished claim of “preserving the college through two world wars and a depression.”

Coming to grips with the legacy of President Good’s student experience and the ways stories of his leadership have shaped subsequent generations, I think, requires at least three acts of imagination on the part of those of us who cherish our own identifications as faculty, staff, students, alumni and friends of the University of Indianapolis. There is no shortage of clues about how to proceed. The place to begin is by paying attention to what Good said — and what those who knew him said — about his life and work.

The third part of my Mission Matters reflections about Irby J. Good will be distributed at the end of the first week of October. In that piece, I invite faculty and staff colleagues to engage the challenges of learning to see President Good beyond Good Hall–in the wider landscape of our campus and the history of American higher education–and learning to see ourselves on the steps of Good Hall where the student Irby J. Good once stood in September 1905.

As always, I invite your feedback at missionmatters@uindy.edu. In the meantime, thanks for taking the time to reflect with me.